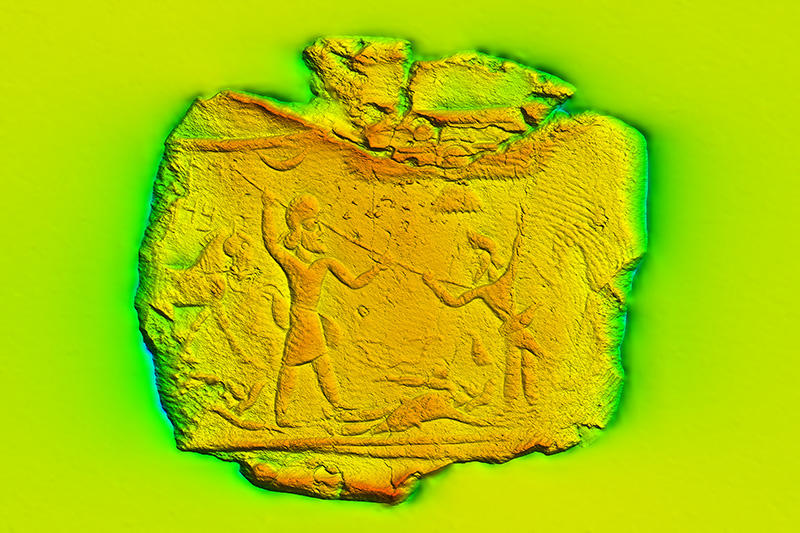 The very latest in 3D recording technology has revealed near-invisible text and artwork from originals in the Bodleian Libraries’ collections. Imagery captured with this technology show what has never before been possible to record.  These recordings have assisted researchers in making exciting discoveries which will be shared for the first time at this event.

Funded by the Helen Hamlyn Trust, ARCHiOx – Analysis and Recording of Cultural Heritage in Oxford – is a collaborative project, bringing together the Bodleian Libraries and the Factum Foundation. Based in Madrid, the Factum Foundation specialise in high-resolution 3D imaging and have worked in cultural heritage institutions throughout the world, producing exceptional, three-dimensional facsimiles of artworks and artefacts.

In this presentation, a panel of experts will discuss how ARCHiOx recordings have supported their research. The Gough Map, the Rawlinson Copper Printing Plate collection, a selection of Japanese ukiyo-e woodblock prints, and examples of ‘Insular Manuscripts’ dating from the 8th and 9th century will all be explored through these incredible new images.

The technology used to create these recordings will be described and explained by their designer, and the Bodleian Libraries' Imaging Specialist.

Members of Bodleian Digital Library Systems and Services will demonstrate online viewers for dissemination of 3D recordings, and newly developed tools which will allow users to interact with them.

The event will be presented by the founder of the Factum Foundation, Adam Lowe.

A display of Bodleian originals, recordings and facsimiles will be exhibited in the Centre for Digital Scholarship following this presentation.

Members of the public will need to book a separate ticket to attend one of these sessions. Bodleian Libraries staff do not need to book for the display session.

You can book to attend a display session at the following times:

Please meet a member of our team next to the inside entrance of the Weston Library shop to take you to the Centre for Digital Scholarship.

Image credit: The above image is a render showing the three-dimensional surface of Pell Aram. Sigill. V, a clay letter-bulla originating from the Achaemenid Empire.

Adam Lowe is the director of Factum Arte and founder of Factum Foundation for Digital Technology in Preservation. Founded in 2001, Factum Arte is a multidisciplinary workshop dedicated to digital mediation for the production of works for contemporary artists. Lowe founded Factum Foundation in 2009 with the aim of using Factum Arte's innovative processes and technologies for preservation, high-resolution recording, education, and the development of thought-provoking exhibitions. Lowe has been an adjunct professor at the MS Historic Preservation at Columbia University, New York, since 2016. In 2019, Lowe became a British Designer Industry, awarded by the British Royal Society of Arts.

John Barrett is a Senior Photographer for the Bodleian Libraries. Since 2005, John has provided photographs of Bodleian originals for numerous publications. His work involves the development of new methods of recording special collections material. He is the author of Imaging Guidelines for the Digitization of Rare and Special Materials, a document commissioned by the Bodleian Library.

Jorge Cano is currently Head of Technology at Factum Arte and Factum Foundation. He has developed a multidisciplinary career working in the intersections of art and technology. Cano is an expert in 3D recording, image filtering and Geographical Information Systems. For Factum he has developed several scanners and numerous tools for data processing. His latest design, the Selene Scanner, has been used by the Bodleian Library allowing imaging specialists and researchers to look at ancient objects with new eyes.

Andrew Irving is the Senior Systems Architect for BDLSS, where he oversees the design and implementation of the Bodleian Libraries’ discovery and access infrastructure. He sits on the IIIF Technical Review Committee, and is an IIIF Cookbook Editor.

Richard Allen is a Software Engineer for BDLSS where he works primarily supporting Digital Bodleian and the Imaging Studio DAMS.  He is also CEO of an Oxford University spinout company that specialises in photogrammetry.

Damien Bove is a Research Assistant for the Gough Map Project and Picture Editor for Imago Mundi: International Journal for the History of Cartography.

Jessica Hodgkinson is a PhD candidate at the University of Leicester funded by the Midlands4Cities doctoral training partnership. Her research explores the participation of women in early medieval book culture in Western Europe through the analysis of surviving manuscripts commissioned, copied, owned and/or used by them.

Jo Story is Professor of Early Medieval History at the University of Leicester. Interdisciplinary methodologies and approaches to evidence are central to her research and publications. Her current research centres on 'Insular Manuscripts' that were made in Ireland or the Anglo-Saxon kingdoms or in monasteries founded by Irish or Anglo-Saxon missionaries on the Continent in the period between c. 600–900 CE.

Alessandro Bianchi is the manager of the Bodleian Japanese Library and curator of the Bodleian Libraries' collection of Japanese rare books and manuscripts. Alessandro is also a Visiting Researcher (2022/23) at the Art Research Centre of Ritsumeikan University.

Chiara Betti is a DPhil student from the School of Advanced Study and researcher of the Rawlinson printing plate collection.  The working title of Chiara’s thesis is ‘The Rawlinson copper plates at the Bodleian Libraries’. The research is funded by the AHRC through the Collaborative Doctoral Partnership.

You must book to attend this lecture and to attend an optional display session in the Centre for Digital Scholarship. Once you have booked your ticket(s), the ticketing system will send you an automated confirmation.

The lecture will be held in the Sir Victor Blank Lecture Theatre, Weston Library.

The display session will be held in the Centre for Digital Scholarship, Weston Library.