A celebration of Oxford brought to you by the Oxford Preservation Trust, Oxford Open Doors is your chance to be a tourist in your own city.

This year's event will be a little be different. You'll be able to enjoy a range of virtual talks, tours and videos throughout the weekend.

What would a medieval person would have told you about geese, bees, sheep and peacocks?

In these four videos one of our resident medievalists, Dr Andrew Dunning, translates excerpts from a book of beasts.

The goose calls its night watch to witness by its persevering noise. No animal senses a human’s smell like a goose. The Gauls’ assault on the Capitol was detected by its noise. Thus Rabanus says: ‘This bird can symbolize foreseeing people, keeping a good watch over their guard.’ [Rabanus Maurus, De uniuerso 8.6.46]

Now there are two kinds of geese: domestic and wild. Wild geese fly high and in a row, and they symbolize those who live far removed from earthly status by living well. But domestic geese live together in villages, often calling out; they wound one another with their beaks. They symbolize those who, although they love a gathering, spend their time on gossip and back-biting.

Perhaps divine providence would not have displayed the natures of birds to us – unless, it may be, he wished to make them useful to us in some way.

Filmed at the Botanic Garden

Bees [apes] are so named either because they cling to one another with their feet [a (by) + pes], or because they are born without feet [a (without) + pes], for they develop both feet and wings afterwards. These are diligent in the task of creating honey. They live in assigned dwellings; they build their homes with indescribable skill; they compose their honeycombs from different flowers; and they fill up their beehives with innumerable offspring in wax cells. They have armies and kings, and they wage battles. They flee from smoke and are provoked by a disturbance.

Many people know from observation that bees are born from the corpses of cattle. For to create these bees, the flesh of slaughtered calves is beaten; worms are created from the rotten gore. Afterwards, the worms become bees. Strictly speaking, however, the ones called ‘bees’ come from oxen, just as hornets are from horses, drones from mules, and wasps from asses.

The Greeks call the larger bees created in the honeycomb’s outer cells ‘castros’. Some people think they are called kings, because they lead their beehives [castra].

They ordain a king for themselves, they appoint people, and though placed under a king they are free. For they also maintain his privilege of judgement, and have affection for him by the fidelity of their devotion, since they choose him as king in the same way as a deputy for themselves, and they honour him with the entire swarm. But the king is not selected by lot, because a lot involves chance rather than judgement, and often the worse candidate is preferred to the better one by the irrational falling of the lot.

None of the bees dare to leave their homes, nor go out into any pastures, unless the king has gone out first and has claimed authority for himself with his flight. They go forth through fragrant fields where they inhale the odours of the flowers of the garden, where streams flow among fragrant grasses, where the banks are pleasant. There, lively youth play their games, there men take their athletic persuits, there they find release of cares. The first foundations of the hives are laid as a delightful labour among the flowers and sweet herbs.

The sheep is a soft wooly domestic animal, with a vulnerable body, a gentle spirit. Its Latin name, ‘ovis’ is derived from ‘oblations’, because when the ancients first began sacrificing, they did not kill cattle but sheep. Some people call them two-toothed, because some have two upper teeth along with eight others. The gentiles used to offer these especially in sacrifice.

When winter comes, the sheep grazes insatiably and tears at the grass voraciously, because it senses the coming sharpness of winter. It first stuffs itself with grass for food, since all the grass is destroyed by the freezing cold.

Sheep, as we said, represent innocent and simple people among Christians. Furthermore, at times the sheep also allegorically displays the mildness and patience of the Lord himself. A passage of Isaiah on the innocent Saviour’s death says, ‘as a sheep before her shearers is dumb, so he openeth not his mouth.’ [Isaiah 53.7] In the Gospel, sheep are the faithful people: ‘The sheep hear his voice’. [John 10.3] And in a psalm: ‘Thou hast put all things in subjection under his feet: sheep and oxen’.[ Psalm 8.6–7] Two sheep represent the peoples of the nations that a man nourishes, that is Christ, on which it is read in the prophet, ‘in those days a man shall nourish a young cow and two sheep; and because of the abundance of milk he shall eat butter’. [Isaiah 7.21–22]

The peacock’s name comes from the sound of its call; its flesh is so tough that it hardly suffers decay, and it is not easy to cook. Concerning it, someone once said: ‘Do you admire him whenever he spreads out his jewelled wings, and can you hand him over, hard-hearted man, to the cruel cook?’ [Martial 13.70]

Because Solomon carried a peacock from distant lands, and it has different colours in its feathers, it is a sign of the gentile people, coming to Christ from remote parts of the earth, who also shine brightly, adorned with the grace of many virtues.

A striking medieval image of Noah’s Ark hides the animals but reveals the tragic side of the story.

The teenage Lister sisters, Anna and Susanna, were among the first women to use microscopes to make scientific drawings. Find out more about the copperplates made for their father's comprehensive study of shells and molluscs. 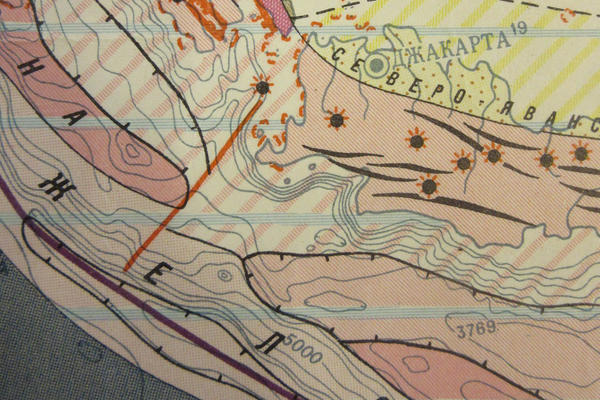 Find out more about this 1970 Soviet map of the Pacific and how it coincided with the developing theory of plate tectonics in the 1960s that led to an entirely new understanding of the planet.

Drunken ants under the microscope

Robert Hooke’s Micrographia revealed the hidden nature of tiny everyday creatures and objects with illustrations drawn through a microscope. Not everything complied, Hooke had to drug an ant with brandy to keep it still long enough to draw. 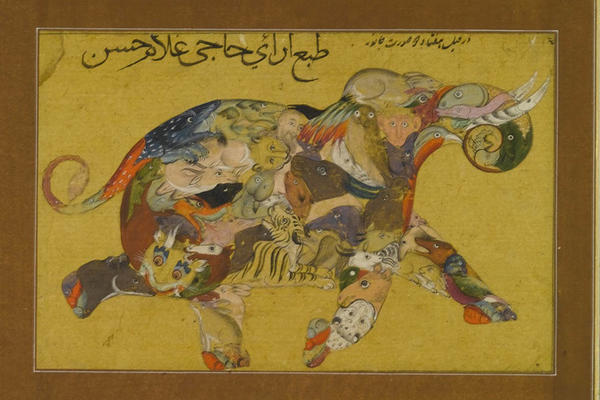 Delve into the detail of this elephant and see how many animals you can spot. Made as part of a picture-book for the courts of the fourth and fifth Mughal Emperors, Jahangir and Shah Jahan, there are 72 creatures to find. Maybe it will inspire your own collage?

Visit us in person